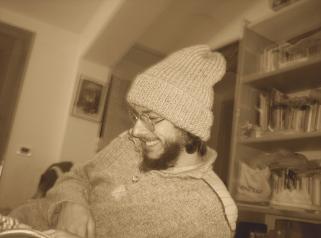 I'm a Free Software developer grown up in Rome - Italy.

I've played a bit with a Commodor Vic-20, getting in touch with (Basic) programming at the age of 10, later learned some pascal at school and C helping my big brother with homeworks. Then I stopped using computers, being taken by the sweet romanticity of theatre, poetry, music and civil disobedience.

In 1993, at the age of 18 I left my parent's house and payed my first education tax, to study Social Science. I came out of a technical high-grade school, and got bored of technical educations. I strongly belived (and still do) that the education is not worth taken if its only application is finding a job, so I never tought about becoming a Social Scientist (most co-students ended up working for costume TV programs).

After a year I've estimated that the taxes were too much for my finances. I didn't give a single exam, but I've learnt a lot and had much fun. It is during that year that the computer field came back knocking on my mind. I've heard about The Internet before actually seeing it, and that's probably been a luck. I've heard about its social impact, I've felt the enthusiasm of a coming revolution, I've read about collective intelligence, the fragmentation of capitals, the freedom of information, the time acceleration. I've read suggestive science-fiction books, most notably Snow Crash.

Internet access was not widespread in my country, it was mostly possible using bullettin board systems, but I didn't even have a computer, let alone a modem and money for a BBS account. The faculty itself did not provide much access. But I recalled about an invitation I had to go visiting my uncle Rob, as a gift for high-school graduation. He is my father's brother, living in New Jersey for a long time and working there as a CAD engineer. His wife is an Italian teacher. I asked him "do you have Internet access?" he answered "sure!". He and his family hosted me for a long 6 month period (Thanks!).

My life in NJ has been spent in front of PC and SUN monitors. I've learnt how to use Windows(TM) in my uncle's house, surfed the net till feeling overfull of information (a very common experience), made some Access(TM) databases, learned how to write HTML, made some pages for relatives and finally got a job in an Internet Service Provider. There I've met Unix systems and I realized how friendly could a computers be. The company mainly realized web pages. I helped with that (HTML tables seemd to be harldy understood by my co-workers), studied some Java(TM) (alpha version at times) and Perl, implemented and maintained some perl CGI applications written in perl (opening a new branch of the company offers). All the work was done in a Motif(TM) environment, on Solaris(TM) systems.

Finally I got the real feel of what the internet was, studying the TCP/IP protocols stack, joining irc networks, remotely talking to friends sitting in front of a computer back in Italy. I could publish information, I could communicate in synchronous and asynchronous mode with people all around the world, I could build services for this world-wide community. But most amazingly I could do all of this regardless of my physical location.

I begun to exploit such tele-working capabilities doing some works for people in Italy, met on irc networks. At the end of the 3-months visitors permission I once again used the Internet to get a job, writing to the director of the theater I used to work in before leaving and organizing with him for a short tournee with which I could pay the round trip and continue with my new digital researches (I was a lights tech).

At the end of the second 3-months permission I had to choose whether to remain in USA (the company would anticipate the money for the documents) or to come back in Italy. I counted the money gathered thus far, and decided to get a laptop computer in order to continue working wherever I'd eventually decide to stay. It was a used 486DX 100Mhz, with 20MB of RAM. Searched for a Unix operating system and found Linux on the net. With the help of many people on irc networks I handled to install it (slackware floppy disk sets) and configure it for internet access, by modem or LAN, and provide a GUI (fvwm/X11 - still using that).

That's how I've encountered the Free Software: looking for a Unix OS for my PC. The Freedom was an add-on. But over the year it became a very valuable source of information. Working with Free Tools made me somewhat more free. Whatever tool you use it modifies you, it modifies your abhits, and the way you think. When you get used to friendly tools made by people to be useful, and not to be sold you start hating the packages. All those wraps around things, all the marketing and face lifts attached to simple things, making them uncomfortable to use and hard to understand. When you realize that software tools are a product of the human brain, you hate those ones which do not freely flow as ideas *should* do, for humanity health. When you understand that software can be replicated as easily as talking you stop understanding the point of preventing it's spread.

In 1996 I've been working for a few Internet services in Rome, but could not really find any tele-work. On the other hand I enjoyed teaching Internet to the masses :p, with low-price short courses organized by a group of people running a Bullettin Board System (AvANa BBS). That's where my nickname was born.

I tried to drive the BBS guys into the Internet, but could never handle doing so. Currently, I still think the BBS systems are far more advanced then many attempts at reproducing that kind of community on the web. The most similar situations I see are free public or semi-public shells, but very few BBS communities realized this transition (The FreakNet MediaLab is an example of successful transition).

In 1997, I've met Sal and Vic sharing with them many common points of interests. Sal taught me the C language and a more efficient approach to development (planning, mainly), and for a long period of time supported my studies taking care of (shared) incomes. It's during these years that I developed my SINS videogame and the shell chat system shirc. I've started working with them on the italian market, forming the NetLab Team. As a team we joined Palomar New Media on 2000, starting a research and development project about web-based geographical information systems.

In January 2002 my sweet daughter Laura has born, after 9 months and a few days of gestation from the beautiful Diana. We left the city of Rome and bought an apartment in the interland. Diana is an artist, and I'm trying to convince her to sell some of her creations on the internet.

Since 2004 I'm collaborating with Refractions Research on the development and maintainence of their Free Software packages postgis and GEOS. I'm actively involved in the development of Ming (SWF output library) and Gnash (the GNU Flash Player).